hello all members , in this topic I WILL PUT EXPLANATION TO THE FANTASTIC THEORIES OF MODERN PHYSICS IN A VERY SIMPLE MANNER , I WILL WRITE IN ENGLISH AND OTHER ONE WILL TRANSLATE IT IN ARABIC

I WILL START BY SPECIAL THEORY OF RELATIVITY , THEN GENERAL THEORY THEN QUANTUM MECHANICS , I WILL DO MY BEST TO EXPLAIN IT IN A GOOD WAY

WE WILL START BY OVERVIEW ON THE CLASSICAL PHYSICS .
WE WILL START BY DISCUSSING THE NEWTONIAN MECHANICS BECAUSE IT IS IMPORTANT FOR YOU TO BE WILL BASED IN CLASSICAL MECHANICS TO NOTICE THE NEW IDEAS IN MODERN PHYSICS.
THERE WILL BE SOME PARTS COPIED FROM SOME GOOD PAPERS.

IN NEWTONIAN MECHANICS , TIME IS COMPLETELY SEPARATED FROM SPACE(المكان ) , BOTH OF THEM ARE ONLY PLACE OR THEATER IN WHICH ALL EVENTS TAKES PLACE IN AND MATTER ARE PLACED IN THEM.

TIME IS INDEPENDENT FROM STATE OF MOTION , YOU CAN GET ALL CLOCKS IN THE UNIVERSE SYNCHORNISED WITH EACH OTHER , AND THEY WILL STILL GIVE THE SAME READING AS EACH OTHER INDEPENDENT FROM THERE PLACE OR STATE OF MOTION .
AS A RESULT ALL PEOPLE WILL AGREE ON THE ARRANGMENTS OF EVENTS HAPPEN ANYWHERE . EVENTS WHICH APPEAR SIMALTENEOUS TO SOMEONE WILL APPEAR SIMALTENEOUS TO OTHER ONE AND TO ALL PEOPOLE AND THIS IS CALLED "ABSOLUTE SIMALTENOUTY".

Galilean Relativity is a part of what we now call "Classical" or "Newtonian" Physics. Newton's Physics is a very good system for predicting the motion of everything from falling apples to rotating planets, which is why it held sway for so many hundreds of years. It's also very intuitive; which is to say, once you think about it, it kind of makes sense. So when you're reading this part, make sure that it seems to be talking about the same universe you're living in. That way, when you lose that intuitive grasp in the twentieth century, you'll miss it.

Also, be sure to work the problems before you read the answers. You won't need a pen and paper, but you will need to think.

Answer #1: Score yourself ten intuition points if you said it never catches up. Never mind that the frisbee is hurtling towards me at thirty miles an hour: I'm travelling away from it at the same speed, so it doesn't ever catch me. Makes sense so far, right?

Now, let's put a two-year-old in the car with me. Being an egocentric little tyke, he tends to assume that he's never moving. When he looks out the window and sees trees zipping past, he just figures that the trees are racing by. He certainly doesn't conclude that the car, with him in it, is moving past the trees.

Now comes brain strain time. The two-year-old is as correct as we are. If he wants to say that the car isn't moving but the trees are, he's right; if you want to say that the trees aren't moving but the car is, you're right too. Because for any question you ask (such as the one I discussed above about the frisbee catching up), he will get the same answer you do. Scientifically, if he gets all the right answers, there's no basis for saying that his assumptions are wrong; even if his assumptions violate common sense as absurdly as the notion that the car is standing still and the trees are rushing backward.

Going one step further, you can pick anything you want - the sidewalk, the car, or an SST going overhead - as "stationary," assume everything else is moving, and you'll be perfectly successful in predicting the universe. This result is summarized in the following statement: the laws of Physics work in any inertial reference frame. Which is just a fancy way of saying that the two-year old is perfectly correct in believing that he's not moving, as long as he's consistent about everything.

(This phrase "inertial" is pretty critical here: it means that you only count as a reference frame if you are not accelerating, which is to say, if you are not speeding up or slowing down or changing direction. If the driver suddenly slams on the brakes, our little two-year-old will darn well know that he's not standing still, as he feels his body slamming against the seat belt!)

If you think this is just mathematical double-talk, consider this: the trees really are moving. They're spinning around the Earth's center, and around the sun, faster than the fastest airplane you've ever been in. If you say that the people in the car "really are" moving, and they should have to know that they're moving before they try to describe reality, then you have to say that no one will do any real Physics until we can float at some God-fixed point in space, and everything we've figured out so far is just lucky.

Well, all that's not so unintuitive, is it? I mean, it may be a slightly odd way to look at things, but after a while it starts to settle comfortably in your mind. That's the wonderful thing about classical Physics. Let's try a couple of probing questions to test the concept.

Question #2: I'm moving away from you at thirty miles an hour (as in the last question), and you throw a forty mile an hour frisbee at me. So this time, the frisbee catches up; and when it does, it hits me in the head. Now, I've been hit in the head by a lot of frisbees, and I can always tell how fast they're going by how much it hurts. How fast was this frisbee going, by that test? (In fancier words, the frisbee is going forty miles an hour in your reference frame; how fast is it in my reference frame?)

Answer #2: The answer is: in my reference frame, the frisbee is travelling ten miles an hour. To follow up the pain metaphor, the bump on my head is exactly the same size as my last ten-mile-an-hour bump, and nowhere near my forty- mile an hour bump a few months ago.

As in the last problem—as in any relativity problem—we have the measurable facts (which we must agree on) and the explanation (which we might totally disagree on). The measurable fact is that the frisbee inflicted a ten-mile-an-hour bump. Incidentally, if this bump analogy is giving you a headache, just say I have a perfect speed-measuring machine with me. The point isn't the device, the point is the result it measures.

Anyway, we now get to the part we disagree on, the explanation of the ten-mile-an-hour measurement. From your reference frame, it was a darn fast frisbee, but the impact was softened by the fact that I was moving away in my car. From my frame, I was standing still (I'm always standing still in my own frame), but the frisbee was only coming on at ten miles an hour. Either way, we agree that it doesn't hit me too hard. And, as I mentioned before, the important thing is that we agree.

Everything I've said so far is old news in the Physics community, which may lead you to wonder why I'm going through all this pre-Einstein stuff in a paper about Special Relativity. Well, first of all, I want to introduce the classical concept of a reference frame: that concept, and the rule that the laws of Physics are the same in all reference frames, is central to Einstein's work. And second, I want you to understand the proof in the next paragraph. I will get to Einstein soon, but when I do, I will refer to this proof a lot, so you have to understand it.

So: a proof that, in my (travelling) reference frame, the forty-mile-an-hour frisbee really is going ten miles an hour. To start with, let's assume that you throw the frisbee after I pass you, and it takes an hour to catch me. How far did the frisbee travel in that hour (in your non-moving reference frame)? The answer is forty miles: by definition, that's what it means to say "the frisbee is travelling at forty miles an hour." If you got that, the next question should be a snap: how far did I travel in that hour? Thirty miles, because I'm driving at thirty miles an hour. So what do I see? The frisbee starts out ten miles behind me, and, in the course of an hour, it catches up. So, by definition, I must see the frisbee travelling ten miles an hour. Because every hour, it gains on me by exactly ten miles.

This is the crucial explanation, and I want you to note one thing about it in particular. It makes no reference to bumps on the head or any other speed-measuring tools. The tools are not the point: the velocity change occurs as a result of the definitions of distance and speed, and all the tools do is measure that change. The change is real. At this point reread the last paragraph, and look at the following diagram, until you are absolutely convinced that "ten miles an hour" is the only possible answer to Question #2. We're coming up on the most important moment in this paper, and it won't be any fun at all unless you are completely with me so far. 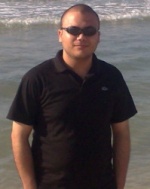